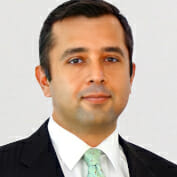 Apricum is pleased to announce the appointment of Vahid Fotuhi, one of the MENA region’s most experienced and well-known renewable energy leaders, to its senior advisor team.

Mr. Fotuhi will bring his significant expertise, experience and network to support Apricum on a range of strategy and transaction advisory projects as well as with the opening of its first office in the Middle East in early 2022. “We are delighted to have Vahid’s support as we open our new Dubai office. As one of our key regions, we have been active in MENA for many years, however, the new office signals a ramp up of our resources, capabilities and presence,” said Apricum Managing Partner Nikolai Dobrott. “Vahid’s network and experience in MENA’s renewable sector is outstanding and we look forward to working with him to deliver our clients further expertise and region-specific insights in our projects.”

Mr. Fotuhi has an impressive track record of achievements in his more than 20 years of experience working in Africa, Middle East and Central Asia across the full spectrum of the renewables value chain from strategy, project origination and financing to construction and asset management.

Until recently he was the vice president, Europe, Middle East & Africa at SOURCE Global, a leading producer of solar powered drinking water. Prior to that, he was the managing director, project origination at Access Power, a regional developer, owner and operator of renewable energy assets in Africa and Central Asia. During his six years at Access Power, he originated, developed and helped finance (equity and debt) greenfield solar and wind power projects in 12 emerging markets, delivering over USD 600M worth of clean energy assets in partnership with EBRD, CDC, Proparco, FMO, and Total.

Prior to this, Mr. Fotuhi spent 8 years at BP where he held executive-level positions, including the regional head of BP Solar for the Middle East. He also led BP’s Integrated Supply & Trading (IST) analytics team in Dubai where he ran quantitative assessments for MENA investment opportunities.

Mr. Fotuhi is the founder of the Middle East Solar Industry Association (MESIA), the largest and most active solar trade organization in the Middle East, which he established in 2009.

Mr. Fotuhi holds a master’s degree from The Johns Hopkins University in Baltimore, USA and a BA from McGill University in Montreal, Canada.