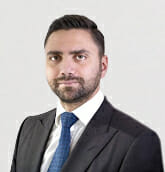 Apricum is pleased to welcome Wassef Sawaf, a highly experienced utility-scale, commercial and industrial solar developer in the MENA region, to its team of senior advisors. During his more than 10 years in the solar industry, Mr. Sawaf has led the creation of two successful solar project development companies, originating and structuring scores of solar projects around the world.

Prior to that, he was the chairman of Yellow Door Energy, which he co-founded in 2015, one of MENA’s largest commercial and industrial solar developers.

In 2010, Mr. Sawaf co-founded Adenium Energy Capital, which he built over his eight years as CEO into a global solar PV developer with projects across four continents, developing over 750 MW of utility, commercial and industrial solar projects with a total project value of USD 1.3B.

Mr. Sawaf’s earlier roles include CEO of the North American and Asian operations of Kazareen Textile Company (KTC), and financial analyst at a boutique private bank affiliated with UBS in Switzerland.

Dubai-based Mr. Sawaf will bring his wealth of experience and expertise to a range of strategy consulting and transaction advisory projects at Apricum.

Mr. Sawaf holds an MBA from Queen’s University in Toronto and a bachelor of business administration from the American University of Beirut. Mr. Sawaf is also an active member of YPO (Young President’s Organization) since 2011.