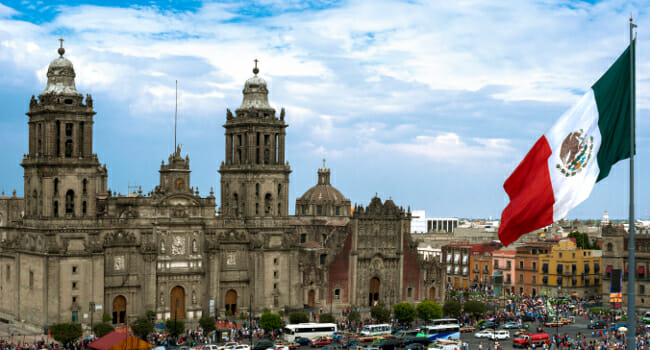 While established renewable energy (RE) markets such as Germany, Spain and the USA have mainly based their RE-market growth on feed-in-tariffs or tax incentives, Latin America, with Mexico and Brazil at the forefront, has taken a different approach, refusing to grant feed-in-tariffs for renewable energy generation. Mexico’s renewable energy scheme portfolio consists of a combination of well-proven regulation schemes, such as net metering and self-supply schemes, with strong market-oriented schemes, such as the small-scale producer scheme, in which renewable energy plants must compete directly with fossil-fired power plants. These three power schemes have distinct advantages and disadvantages, however they all offer business opportunities in the short- and long-term. 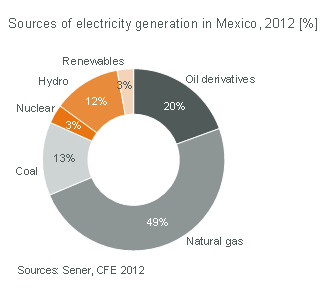 Mexico’s electricity demand is forecast to grow by 3.9% annually from 279 TWh in 2012 to 440 TWh by 2024. The existing power generation capacities will need to double within the same time frame to around 125 GW in order to meet this growing demand. Today’s Mexican electricity market is dominated by gas-fired generation followed by oil derivatives and coal.

In 2012, non-fossil-powered generation contributed approximately 18%, with the largest portion coming from hydropower with 12%. Solar power contributed less than 0.1%. This is set to change, as the government has issued a target of 35% clean energy generation by 2024. While there are no specific targets set for each clean energy source including nuclear at the moment, we expect a more detailed roadmap after the new energy reform is passed this year (currently in advanced legislative stages).

The main goal of the energy reform is to open up the state-dominated oil sector and introduce private-sector participation, but it may also put pressure on the national utility monopolist CFE (Comisión Federal de Electricidad) to increase its effort in using renewable energy. Historically, CFE and its predecessors have had a monopoly on energy generation, transmission and distribution. In the past, the Mexican government introduced several laws to increase private sector participation in the electricity sector. However, CFE remains the main energy generator with >60% market share and is the only transmission and distribution grid operator in Mexico. Not surprisingly, CFE has not been the driver of renewable energy growth in Mexico so far, focusing instead on the construction of new gas-fired combined cycle power plants to exchange oil for gas. In terms of solar power plants, CFE’s engagement until now has been limited to a 5 MW test facility in Baja California involving four different solar technologies.

Mexico has abundant solar resources especially in the sunbelt region in the north, such as Baja California, with an average solar irradiation greater than 2,200 kWh/m² per year compared to Germany with ~1,000 kWh/m² per year in most locations. Across Mexico, daily radiation varies between 1,600 and 2,250 kWh/m² per year, which is comparable to some of the best locations in the world such as the MENA region (Middle East and North Africa) and Chile. 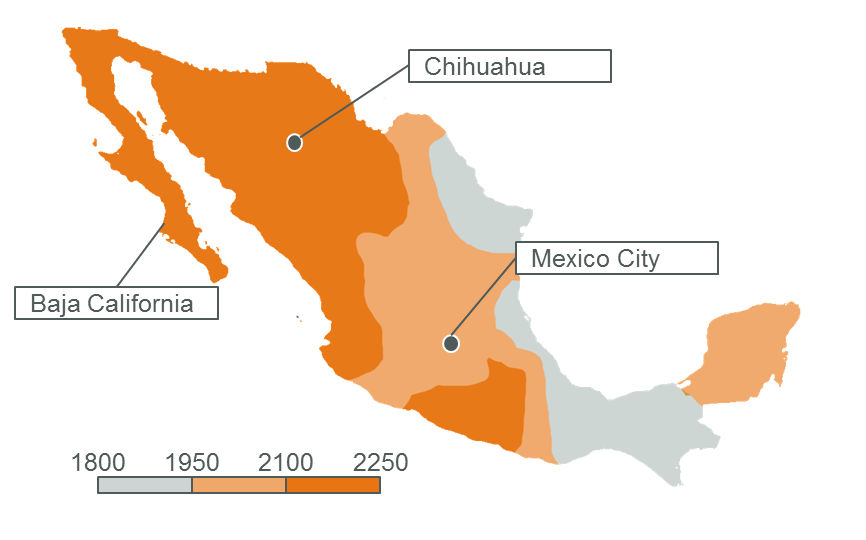 With such attractive geographic conditions, Mexico is well-positioned to generate cheap solar power with an LCOE (levelized cost of energy) of 11 USDc/kWh in good areas compared to >20 USDc/kWh for diesel-fired and oil-fired generation.

In the past PV has been used to electrify offgrid regions in Mexico reaching annual installation levels of just 5–15 MW up until the end of 2012. In 2013 we saw 60–80 MW installed, including one 38 MW utility project in Baja California developed by Gauss and Martifer.

In 2014 we expect annual installations of the size of 200 MW reaching 250 MW in 2015. This growth will be based on three different regulatory regimes: Net metering scheme, self-supply scheme and small-scale producer scheme.

As in other countries such as Denmark, Brazil, Costa Rica or the Dominican Republic, the net-metering scheme generates credits for the power that is not consumed but fed back into the grid, thereby lowering the electricity bill with each kWh produced by a PV system. In Mexico, net metering applies for residential systems of up to 10 kW, up to 30 kW for commercial systems and up to 500 kW for small projects. The consumption and generation is netted for a maximum period of 12 months.

Currently, the largest potential exists within the ‘Domicilio alto consumo’ (DAC) residential segment, which pays the highest electricity tariff of around  28 USDc per kWh. These 500,000 households benefit not only from saving electricity but also from lower electricity tariffs per kWh consumed for the remaining electricity, as electricity in the lower consumption brackets is heavily subsidized. Despite an attractive net-metering scheme, residential home owners have only invested minimally in PV systems. This is due to a lack of awareness, bad experience in the past with PV systems, and an unwillingness or inability to finance. Although a typical DAC PV system would be in the range of 1–2 kW to reach a lower consumption bracket, the cost of these relatively small PV systems is in the order of USD 2,500–4,800. Such amounts may still present a hurdle given local bank interest rates of 16%. Solar leasing could therefore become a viable alternative, with companies such as Envolta already pursuing this business model.

In summary, there is good potential for the net-metering scheme for the residential and commercial segments in Mexico with 100–150 MW PV installations expected annually in the medium term once financial barriers are overcome.

The self-supply scheme has the largest long-term renewable energy potential in Mexico as nearly 60% of the electricity is consumed by medium and large enterprises that have faced ~8% annual price increases in the last four years. These companies are looking for opportunities to lower their  electricity cost, which is around 11–14 USDc per kWh depending on the consumption level of the company.

The self-supply scheme allows the generation of electricity through an independent power producer (IPP) that sells electricity to private offtakers such as manufacturing or energy-intensive industries.  The term self-supply is misleading as the generation assets are typically not installed close to the actual energy-consuming facility and the electricity is transmitted via the distribution grid. The cost for using the transmission or distribution grid is subsidized for renewable energies and depends on the voltage level, e.g. 0.5 USDc per kWh for using high and medium voltage grids. The fact that the transmission charge is independent of the actual distance between generation asset and consumption center eases project development and finding of private offtakers to sign power purchase agreements (PPA). CEMEX, the largest Mexican concrete producer was one of the first companies to install a 100 MW wind farm in Oaxaca in the south of Mexico to deliver electricity to its manufacturing plants throughout the country.

As the cost of generation for wind power remains lower than for solar in good wind spots, the self-supply scheme is dominated by wind power plants. In 2013, the first solar self-supply project started development: Ford Motor Company agreed to buy the majority of electricity from a 20 MW solar plant being developed in the sunbelt in the state of Sonora to provide electricity for its manufacturing facility.

One obstacle remains however, as the offtaker is required to hold a share in the generation assets for the scheme to qualify as self-supply. A change to this rule is currently discussed within the energy reform bill that is in advanced legislative process.

In the medium term we estimate annual PV installations in the range of 150–250 MW and >500MW in the long term. In the short term wind power will comprise the vast majority of self-supply projects.

Renewable energy plants within the small-scale producer scheme must compete directly on market prices for power generation from fossil-fired plants. It is the scheme with the highest short term but lowest long-term potential in Mexico.

The scheme allows for a 20 year PPA with national utility CFE that is pegged at 98% of the area’s variable cost of power generation for projects less than 30 MW. The node price is determined on an hourly basis and varies significantly throughout the day, season and region. One of the areas with the highest variable cost of power generation in Mexico is Baja California which is separated from the national grid and must import fossil-based resources as diesel or oil to secure its energy supply.

The first 30 MW solar project developed by Gauss Energía and Martifer Solar is based on this scheme, as well as around half of the projects in the ~400 MW pipeline, and will be located in Baja California.

However, there are two side effects that will limit the growth of this scheme: a) the limited grid capacity per node and b) the influence of new capacities on the variable price of generation cost. In Baja California in particular the grid capacity for fluctuant energy is limited as there is no connection to the main domestic grid and limited demand. Concerning the second side effect, the connection of a renewable energy plant to a node will most likely reduce the variable generation cost during the day as the merit order curve is shifted down. Hence, project financers must take into account the risk of volatile energy prices and potentially decreasing revenues as more and more renewable energy plants are added to a specific node. Financing will become more difficult after the first solar plants are running and the impact on price becomes transparent.

We anticipate good short-term potential for the small-scale producer scheme in the range of 150–200 MW PV installations. In the medium and long term we expect only minor development.

A mix of renewable energy schemes is beneficial 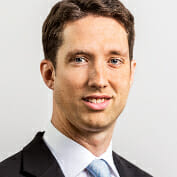 Sebastian Schierenbeck has considerable experience in the areas of PV, wind energy, RE hybrid systems and renewable energy markets. He has led several projects in which he defined the acquisition strategy for a major PV distributor, built the solar strategy for a major GCC conglomerate and advised on the bid strategy for several large corporations.

Sebastian Schierenbeck has considerable experience in the areas of PV, wind energy, RE hybrid systems and renewable energy markets. He has led several projects in which he defined the acquisition strategy for a major PV distributor, built the solar strategy for a major GCC conglomerate and advised on the bid strategy for several large corporations.