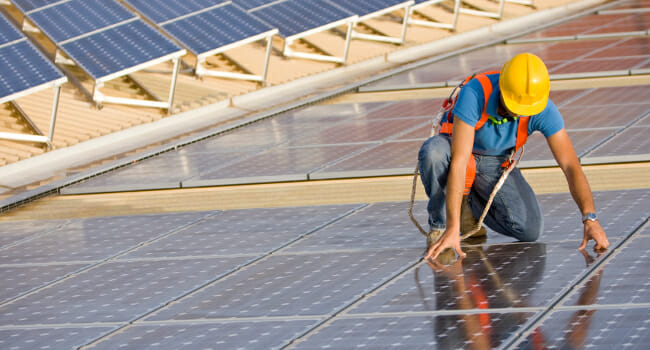 Electricity payback time of a PV system – the facts

Opponents of solar energy tend to circulate the misinformation that a PV module cannot generate the amount of electricity during its lifetime that was used in its production.

How much electricity is really needed to make a PV module?

To answer this question, let’s analyze step by step how a crystalline-silicon PV module is produced. This standard technology accounts for nearly 90% of the PV market. A standard PV module’s power output ranges between 200 and 250 Watts. Let’s work with the lowest case of five modules being required to create a total of 1,000 Watts or 1 kW of PV power, as the basis for calculating the electricity needs.

In the final module manufacturing step, the cells are “packaged” in plastic film; a glass cover is added and furnished with an aluminum frame. Making these materials and packing them into the module requires a total of approximately 300 kWh of electricity.

When we add up all of these input materials and manufacturing steps, a total of around 1,155 kWh is needed to produce 1 kW of standard PV modules.

Fine, but a PV module alone does not make up an entire PV system

That is absolutely correct. To the figure of 1,155 kWh for the PV modules, we also need to add the electricity required to manufacture the inverters, the mounting structures and the cables, commonly referred to as balance-of-system (BOS) components. The total electricity required for the BOS components is approximately 400 kWh. That means, we end up with a total of 1,555 kWh of electricity as the input into a 1 kW PV system.

Well, 1,555 kWh sounds fairly large. How long will it take to produce this much power from a 1 kW PV system?

That certainly depends on the location. Sunshine is the fuel and its intensity differs around the world. Let’s look at two exemplary locations: Germany and California.

In Germany, a 1 kW PV system produces 900–1,000 kWh of electricity per year. Consequently, it takes about one and a half years to amortize the electricity input.

In California, there is certainly more sunshine throughout the year, enabling a 1 kW PV system to produce 1,700–1,800 kWh of electricity per year. Thus, electricity amortization is accomplished in less than one year.

So, electricity payback time for a PV system ranges between one and a maximum of two years depending on location?

Yes, this may sound surprisingly little to some, but they are the facts. Indeed, with ongoing improvement in the PV technology itself and in manufacturing processes, we will see a further decrease of power input in the future. Electricity consumption along the PV value chain, encompassing BOS components, is likely to be reduced by at least 30% by 2020. For instance, the energy-intensive production of the raw material polysilicon can be reduced by 40% through the use of FBR (fluidized bed reactor) technology, compared with standard technology.

By 2020, the total electricity input required to install a 1 kW PV system will fall to less than 1,100 kWh, giving us an electricity payback time of just six months in the world’s sunniest locations.