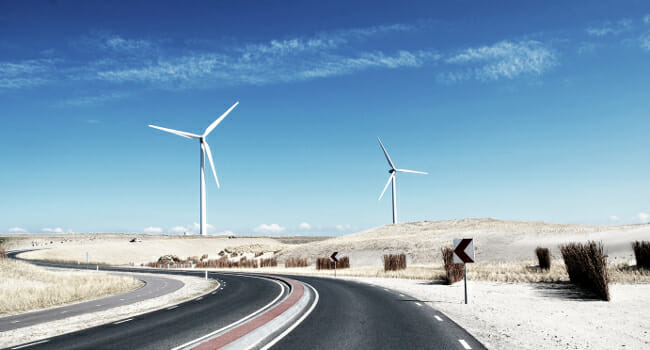 Currently, global installed wind capacity of 283 GW (2012) is concentrated in three main regions: 38% is located in the EU, 27% in China and 21% in the U.S. While the dominant role of these traditional wind markets is likely to continue midterm, the extent of future growth remains uncertain.

This is due to several factors, such as the recent wave of policy uncertainty in the European Union. In Spain, for example, changes to the Spanish regulatory regime for renewables could cost the local wind industry up to EUR 300M in lost revenues during 2013 according to an estimate of the Spanish Wind Energy Association (AEE).

In China, wind power growth outpaced the grid capabilities. This led to a new challenge – the curtailment of electricity generation. In 2012, curtailment was responsible for the inactivity of 20% to 30% of wind turbines across the country, and equated to a financial loss of USD 1.6 billion.

In the U.S., market players lack a stable, long-term policy environment. The recent extension of production tax credits and investment tax credits was only granted for the short timeframe of two years.

Wind players are increasingly under pressure to find new areas of growth in emerging markets. As more and more players decide to move into the major growth markets such as India, Brazil, Mexico and Canada, other high-potential markets should be investigated.

The range of average wind speeds in GCC countries is comparable to Germany (3–7 m/s), one of the countries with the world’s largest wind power production; however, wind potential has remained largely untapped so far with GCC cumulative capacities in 2012 being less than 2 MW (Germany: more than 31 GW).

The GCC region is among the fastest growing global regions in terms of power consumption, with a CAGR of 8% between 2009 and 2020 (world: 2.5%), driven by a strongly growing population, rising living standards and industrialization efforts.

Wind power generation is significantly cheaper than oil-based power generation, if oil is valued at market prices. Effectively, wind power frees up more locally produced oil available for export. The average LCOE in favorable wind regions (> 5 m/s) varies between 9 and 16 USD cents/kWh, which is well below the present cost of oil-fired electricity generation of around 19 USD cents/kWh at an oil price of 100 USD/barrel.

At specific sites in Oman and Saudi Arabia, even LCOE as low as 8 USD cents/kWh can be realized. Subsidized power prices, however, make economic viability highly dependent on political backing. 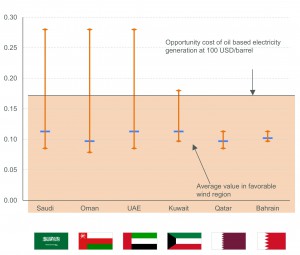 Harsh climatic conditions of the region should not be considered as a deal breaker. Technical solutions are available to mitigate impact (e.g., control system and cooling systems to avoid overheating, protective coatings to avoid abrasion and soiling of blades). Experiences and learnings collected in neighboring countries like Egypt (Zafarana wind park, > 500 MW) can be leveraged.

Saudi Arabia accounts for half of GCC’s power demand (273 TWh in 2012) and will be the region’s primary wind market in the short term (100 out of the region’s 200 MW installed capacity by 2015). As a result of the immense power demand, an additional 47 GW and approximately 29 GW of replacement capacity are needed by 2020.

Saudi Arabia provides various suitable sites for large-scale onshore wind generation. The first criterion for site suitability is a minimum wind speed of around 3.7 m/s at a height of 10 m in order for wind generation to be competitive with the LCOE of oil-fired electricity generation. Secondly, suitable wind power sites must also have adequate access to the electricity network.

The majority of sites fulfilling these requirements are situated along the two coastlines, for example, Yanbu in the West and Juaymah and Dammam/Al Khobar/Dhahran in the East (see Fig. 2). With existing wind measurements limited to location of meteorological stations only, additional attractive sites can be expected in unchartered regions. 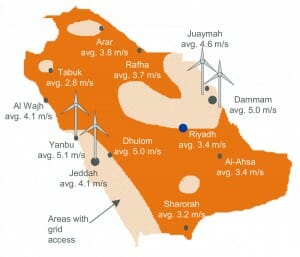 In May 2012, the Saudi government announced one of the world’s most ambitious renewable energy programs. Government body K.A.CARE plans for the installation of 9 GW of wind power capacity by 2032 and aims to release the first round of tenders in large renewable power generation projects in the next couple of months. By 2017, a cumulated capacity of up to 1.8 GW is expected to be installed.

The country’s ambition to strongly develop wind alongside solar power is serious. Countrywide assessments for suitable wind sites are currently being conducted on behalf of K.A.CARE and national oil and gas company Saudi Aramco.

As with solar, local content of up to 80% is eventually envisaged. Foreign players are advised to enter partnerships with Saudi industry groups and investors to obtain access to tenders and to benefit from local experience and reputation. Local companies in turn receive access to technology and benefit from experience in the realization of wind projects.

Overall, estimated annual investment volume in wind power in Saudi Arabia amounts to USD 100–200M by 2015 and is expected to increase to USD 1.1–1.5B by 2020. Business opportunities will be created for players of all wind industry segments as a result of local Saudi interest across the whole value chain.

If you would like to discuss opportunities for your company in Saudi Arabia’s wind energy market, please contact Florian Mayr, head of Apricum’s wind and hybrid practice.