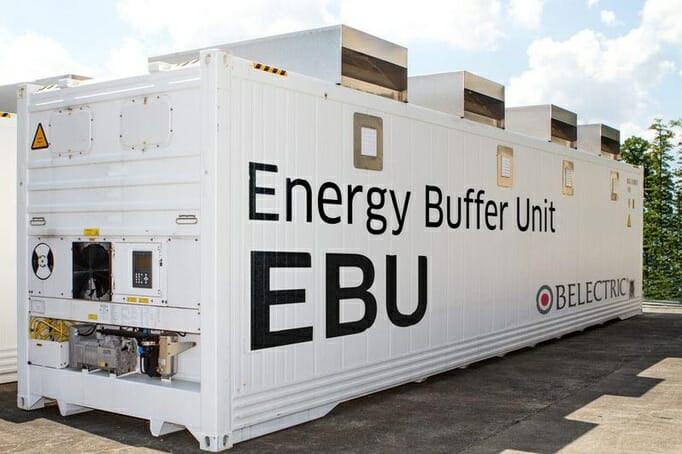 Stationary battery storage systems: What will drive their remarkable growth?

If you ask a random person on the street what a battery is used for, they would probably first think of the useful items keeping their laptops, smartphones and (electric) cars working. In fact, mobile devices account for the most widespread usage of batteries these days (about 85% of the market volume in 2014). Recently however, the number of battery energy storage systems (BESS) used for stationary applications, both utility-scale and distributed, has started to grow significantly. According to recent estimates, today’s annual market volume of about USD 1B is expected to reach an impressive USD 20–25B by 2024 – hence, it is worth having a closer look at what is driving this market. 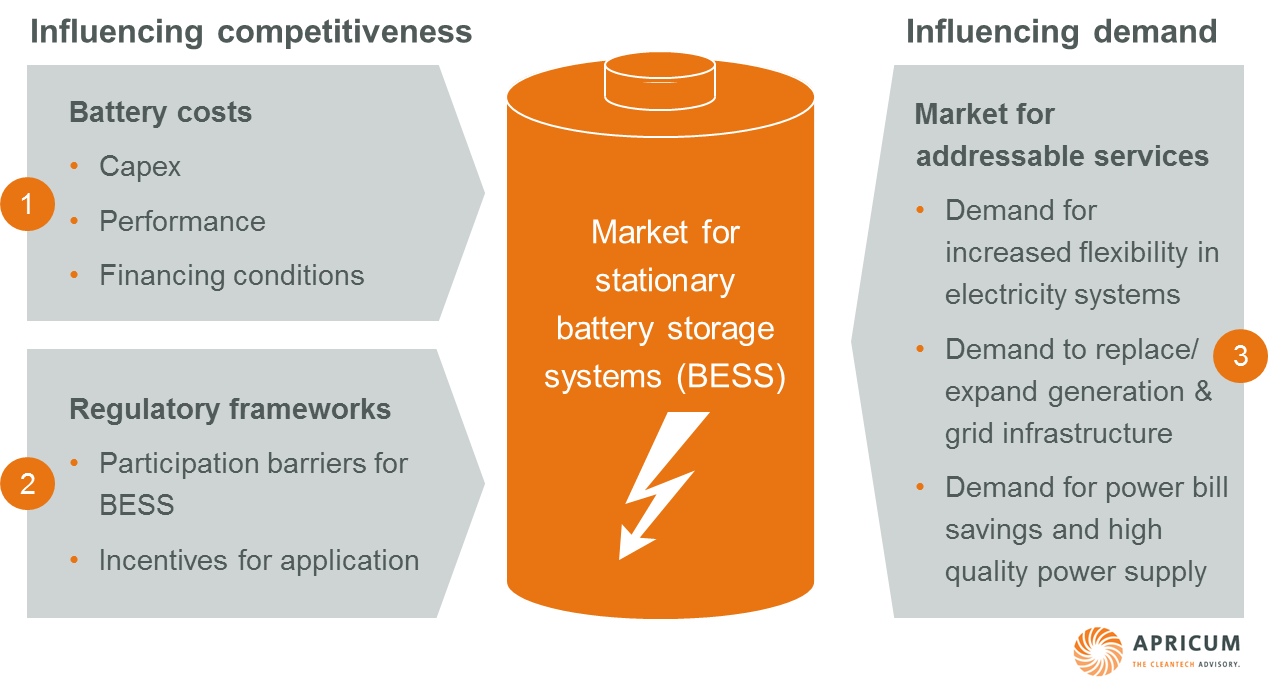 Simply explained, the growth of stationary BESS is driven by positive developments in 1) battery costs and 2) regulatory frameworks that both increase the competitiveness of batteries to participate in 3) a growing market for addressable services.[1]A fourth growth driver is the more suited application of BESS in specific settings, e.g., increased energy density to meet space constraints or improved safety by using non-toxic, non-flammable materials. However, due to the relatively lower impact on stationary applications, this aspect is not covered in more detail in this article

The key prerequisite for the widespread application of stationary BESS is a decrease in the related costs over the lifetime of the battery. This can be mainly achieved through reduced capex, performance improvements or better financing conditions.

Like all relatively nascent technologies entering an established market, BESS depend on favorable regulatory frameworks to a certain extent. At the minimum, this means the absence of participation barriers for BESS. Ideally, authorities will see the value in stationary storage and incentivize its application accordingly.

The examples mentioned above are all major events attracting significant attention in the energy storage world. However, also smaller, often unnoticed changes in regulations can have a powerful impact on the regional applicability of BESS. Potential examples include:

Specific trends in global electricity markets are triggering a growing demand for services that can, in principle, be served by stationary BESS. Relevant trends are:

Obviously, there are various conventional, non-energy storage options for meeting this demand. Whether batteries constitute a better alternative must be assessed on a case-by-case basis and can vary strongly among geographies. For example, while there is a positive business case for T&D deferral in places like Australia or Texas with vast distances to overcome, the typical cable length at the medium-voltage level in Germany is less than 10 km, which makes a conventional grid extension the cheaper alternative in most cases.

Often, providing just one service with BESS is not sufficiently profitable. Hence, services should be combined to “benefit stacks” to allow for cost reductions and compensation through multiple mechanisms. Starting with the application with the largest revenue stream, spare capacity should first be used to seize on-site opportunities and avoid regulatory barriers, such as UPS. For any remaining capacity, services delivered to the grid, such as frequency regulation, can be considered as well. Needless to say the additional services must not get in the way of the primary service.

Improvements within the drivers described above will bring about new business opportunities and the consequent growth of the market. However, negative developments can in turn lead to business models not reaching – or even losing – economic viability. For example, projected cost declines might not materialize due to unexpected shortages in a certain raw material, or the commercialization of new technologies is not progressing as anticipated. Changes in regulations could create a framework BESS cannot compete in. Also, developments in neighboring industries could create additional competition for stationary BESS, e.g., the use of (curtailed) renewable energy sources for frequency control: In some markets, such as Ireland, the grid code already requires wind parks to act as a primary reserve.

Consequently, it is vital for companies to closely follow, anticipate and even actively influence the developments in battery costs, regulatory frameworks and demand to successfully participate in the global market for stationary battery storage.

Apricum supports the growth of BESS market players including manufacturers, developers, users (e.g., utilities, TSOs) as well as investors. Our service range includes transaction advisory such as sell-side and buy-side mandates along with strategy consulting for identifying and seizing the most attractive business opportunities around the world.

[1] A fourth growth driver is the more suited application of BESS in specific settings, e.g., increased energy density to meet space constraints or improved safety by using non-toxic, non-flammable materials. However, due to the relatively lower impact on stationary applications, this aspect is not covered in more detail in this article

[5] Sum of absolute values of changes in output

[6] When hurricane Sandy hit the US east coast in 2012, more than eight million people were temporarily without electricity due to the destruction of (centralized) infrastructure

[7] In case extension of grid infrastructure is driven by flexibility needs, this would be part of the previous trend