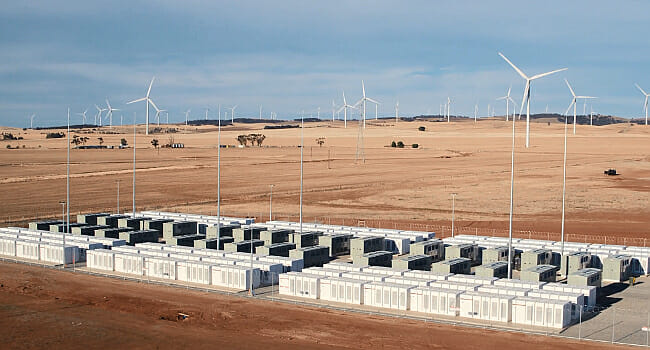 Strong Tailwinds Ahead – the Case for Wind Plus Energy Storage

When people think about combining energy storage with renewable energy, they typically think of adding batteries to PV systems, be it roof-top panels on a home in Germany or multi‑GW utility‑scale installations in the deserts of the MENA region. However, we are witnessing an increasing number of projects announced globally by wind developers and OEMs that involve energy storage deployments next to wind turbine installations. Recent strategic partnerships between leaders from both industries, such as Vestas and Tesla, further emphasize the emerging importance of this combined application.

But what kind of value can energy storage specifically add for the wind industry? What is the economic viability of the related use cases? And what are the implications for wind players? This article will address these questions and provide examples.

Before we start, it is important to keep in mind that energy storage does not necessarily need to be co-located with a wind turbine to add value. In fact, ancillary services to mitigate the impact of variable renewable energy input can be provided from any grid connection point centrally (in front of the meter) or distributed (behind the meter), at least in well-functioning grids. However, in a “virtual” co-location setup, energy storage is utilized to address a multitude of impacts on grid stability, which do not exclusively stem from a specific wind farm. Therefore, to understand the value that energy storage can directly add to a wind power asset, we will focus only on installations that are physically co-located and therefore those use cases highlighted in Figure 1 below. 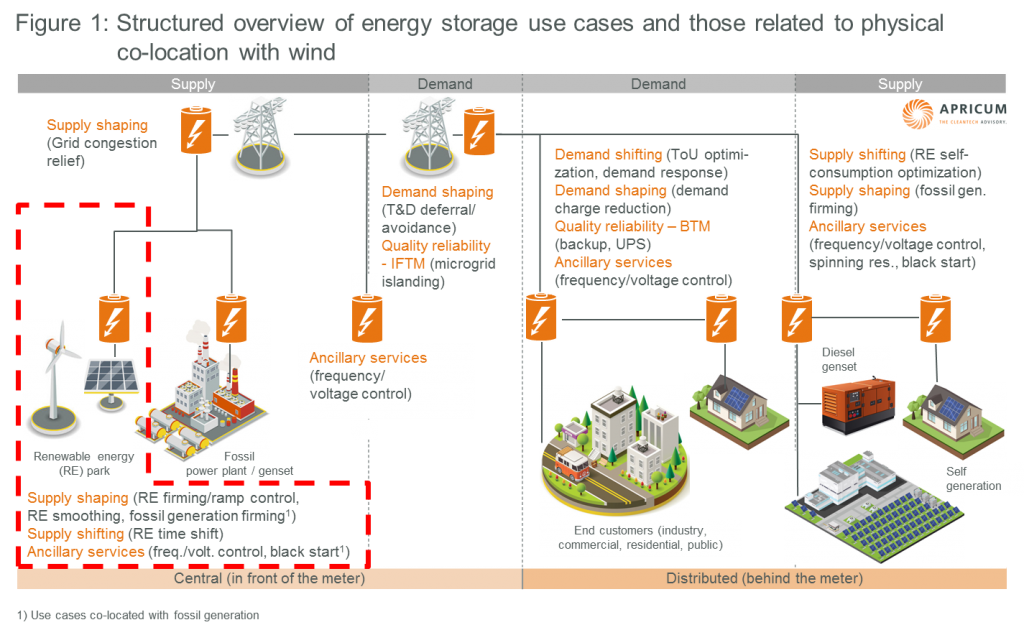 Use cases for energy storage co-located with wind power generation

We see four principal ways of benefitting from the addition of energy storage to a wind farm.

Energy storage can mitigate rapid output changes due to varying wind speeds and thereby ensure a stable power output and controlled ramp up and down of the wind power generation. This can be necessary for the wind farm to comply with grid codes, e.g., not exceeding a certain rate of change over time measured in percentage of nameplate capacity per minute.
Today, ramp rate control and/or renewable energy firming is typically conducted in island grids such as in Puerto Rico or Hawaii, where strict grid codes would otherwise prevent the installation of renewable energy sources. Wind PPAs issued by the local utilities define the exact requirements and thereby trigger energy storage additions such as the 11 MW/4.4 MWh battery added to Auwahi Wind Energy’s 21 MW facility in Hawaii.

In some cases, energy storage is also added at a later stage to provide renewable energy firming for solving serious, unanticipated grid issues. The most prominent example is probably Tesla’s giant 100 MW/129 MWh battery, recently installed at the Hornsdale Power Reserve adjacent to Neoen’s Hornsdale wind farm in South Australia under the now-famous “delivery in 100 days or free” contract. The state’s commission is based on an AUD 510M plan following a series of blackouts in the past 18 months. While the targeted use cases are not entirely transparent, ensuring a steadier wind power generation profile is surely one of them. The economic impact of installing storage is usually to avoid the individual opportunity costs for not being allowed to realize the wind project or, in the Australian case, to avoid (rather hard to quantify) costs of continued blackouts and public discomfort. These costs have to be compared to the costs of energy storage, which Apricum estimates at around 24–48 EURct/kWh[1] for this specific use case.

In many markets such as Germany, it is the obligation of the wind farm owner to deliver power that exactly follows their forecasted generation schedule, which is transmitted to the TSO the day before delivery. In case of deviations, forecasts can be matched through intraday trading, balancing power or renewable energy smoothing with energy storage. Here, batteries are particularly well suited to meet the need for rapid charging and discharging and are increasingly applied.

As an example, Nidec ASI announced in August this year the planned installation of 5 MW/5 MWh of battery energy storage at a utility-scale wind farm on the French island territory of Martinique. This will enable an increase in the forecasted accuracy for electricity production from 70% to 90% compared to previously executed or similar projects.

The economic rationale for adding storage to the wind farm is to avoid high costs for balancing power or even penalties as a result of not meeting the forecasted schedule. These avoided costs obviously need to be lower than the additional costs of adding storage. The cost for each kWh discharged from the storage is as high as 11‑18 EURct/kWh[2] according to Apricum’s estimates. Depending on how much smoothing, i.e., charging/discharging is necessary, this has a substantial impact on the LCOE of the wind power plant including storage. If possible, “smoothing” through intraday trading, often conducted by direct marketers, is usually the cheaper option.

The economic rationale is clearly to achieve higher profits, but this is only possible if price spreads are high enough to accommodate the costs for energy discharged from an energy storage system, which amount to about 18–36 EURct/kWh[3] in this use case. Naturally, these economics only work in markets without a FiT or premiums paid to keep a high and stable price level independent from wholesale price fluctuations.

But the ability of renewable energy time shift can also be a mandatory requirement of a PPA. In the USA, for example, bidders responding to a recent wind RFP from the Massachusetts Department of Energy Resources and the state’s investor-owned utilities, must guarantee delivery during two peak hours on work days in the winter months. Similarly in Thailand, we just saw the first 300 MW renewable energy PPA scheme going live, explicitly requiring a “firm” element in order to reduce the variation in intermittent energy sources such as wind power. More concretely in this example, a delivery of between 98% and 102% of the PPA capacity during peak periods is mandatory. Energy storage will be needed to meet this obligation and opportunity costs have to be considered again to assess economic viability (as mentioned above).

Another trigger for energy time shift is grid curtailment. Grid connection agreements usually allow the curtailment of the output of the wind farm to a certain extent, resulting in a loss of production. This is a well-known event in China for example, where grid expansion does not at all match the speed of wind capacity additions in the traditional wind provinces in the northeast and northwest sub-regions. Curtailment is also happening in Europe, although in some markets wind power producers get compensated for all or at least part of the missed revenues. If there is no compensation, adding energy storage to shift excess generation to times where it can be sold to the grid again can make economic sense – depending on the expected frequency of curtailment events, spot prices and costs of storing energy. At the current LCOS of 14–32 EURct/kWh, however, “throwing away” the excess energy is often the most economic option.

Still, increasing production flexibility and not wasting excess energy seem to be major challenges identified by the wind industry and are reflected in many recent projects, such as the 3 MW wind power-integrating energy storage system using BMW car batteries deployed in the Netherlands by Dutch integrator Alfen and the utility Vattenfall. Another recent example involves Microsoft’s deal with GE to jointly measure and assess how effectively batteries built into the turbines of a windfarm in Ireland can store excess energy for later use. The fact that Ireland will not provide any compensation for wind curtailment from 2018 onwards certainly plays a significant role here.

Using energy storage to provide frequency response has proven to be an economically viable use case in many markets such as the UK, USA and Germany – but there is rarely a technical need to co-locate the storage unit with the wind turbine as mentioned above. Still, there are many announcements from wind companies to add storage to their wind parks and offer grid services. For example, Mitsubishi and Dutch utility Eneco are planning a 48 MW/50 MWh battery system in Germany for renewable energy time shift, but also for serving the Primary Control Reserve market. And Vattenfall’s recently commissioned 228 MW wind park in Wales is currently equipped with a 22 MW battery (again, from BMW) to participate in the UK’s Enhanced Frequency Response scheme. Outside of Europe, Toshiba and NRG Energy have just completed a 2 MW lithium-ion battery system next to NRG’s Elbow Creek wind farm in Texas to offer high-speed frequency regulation services to ERCOT.
The main rationale for storage co-location in these projects seems to be twofold: Firstly, sharing the infrastructure of the wind farm drives down the capex of the battery installation, which increases the likelihood of success in competitive tenders such as the EFR. Secondly, wind players are preparing to “stack” the already feasible revenues from frequency control with the (potential) income generated from the use cases described earlier – requiring the energy storage units to be situated next to the wind park.

Energy storage can add value not only to wind power installations onshore, but also offshore. Recently, the Norwegian state-owned oil company Statoil together with Masdar of Abu Dhabi confirmed their plans to add a 1 MW/1.3 MWh lithium-ion battery system to a 30 MW floating offshore wind farm (“Batwind”) in the second quarter of 2018. The pilot will test both the technical solution and the commercial application of the battery connected to the wind farm, but it is ultimately expected to capture excess wind power, reduce balancing costs and increase revenues through price arbitrage, according to a Statoil presentation, addressing many use cases for co-located storage mentioned above. Another example is Dong’s announcement to integrate a battery system into its Burbo Bank Offshore wind farm – in what will be the first of its kind, aiming to deliver frequency response to the UK grid.

The examples above are entirely based on batteries for storing energy, which is in fact the dominant energy storage technology for co-location with wind power so far. However, other solutions are being examined as well – albeit often in more novel contexts. For example, a group of European countries this summer announced plans to build a giant island in the North Sea. As well as acting as a base for offshore wind O&M facilities, it might feature a power-to-gas unit for using excess wind power to generate gas and transport it to adjacent countries. A similar endeavor was proposed by the Belgian government in 2013 with the aim of building a donut-shaped island in the North Sea to act as offshore pumped hydro storage, again for the purpose of storing excess wind power.

As we have seen, there are multiple ways for energy storage to add value to wind generation assets, although the economic viability of the related use cases is currently still limited. However, we clearly think that both wind turbine OEMs and wind park developers are doing the right thing by already gaining experience through wind-plus-storage pilots and partnerships with the storage industry. With the falling costs for storing power and increasing exposure to volatile and overall rising wholesale prices in many geographies, energy storage has the potential to significantly improve the competitiveness of onshore and offshore wind power plants under future market conditions. To remain successful, wind players need to start not only closely understanding the opportunities now, but also the challenges of applying energy storage in their individual situation.