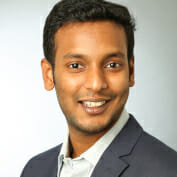 Apricum – The Cleantech Advisory is pleased to announce the appointment of Mr. Saravana Kumar as a consultant, who joins the growing team in Apricum’s newly established Dubai office.

Mr. Kumar will work on a range of strategy consulting and transaction advisory projects with a focus on the MENA region as well as in Europe and abroad.

Prior to his current role, Mr. Kumar completed a successful internship at Apricum where he worked on a range of mandates including market assessment and market entry projects in the vehicle-to-grid, biomethane, solar and hydrogen industries. He also gained expertise in DME-based synthetic fuels used in passenger vehicles and the application of machine learning algorithms for predictive analytics as a student assistant at RWTH Aachen.
Before joining Apricum, Mr. Kumar worked for several years as an engineer for the Airbus offshore delivery center at QuEST Global in Bengaluru, India.
Mr. Kumar holds a master’s degree in management and mechanical engineering from RWTH University in Aachen, Germany and Maastricht School of Management in the Netherlands. During his studies, he was recognized for outstanding academic achievements and was included in the Dean’s List.